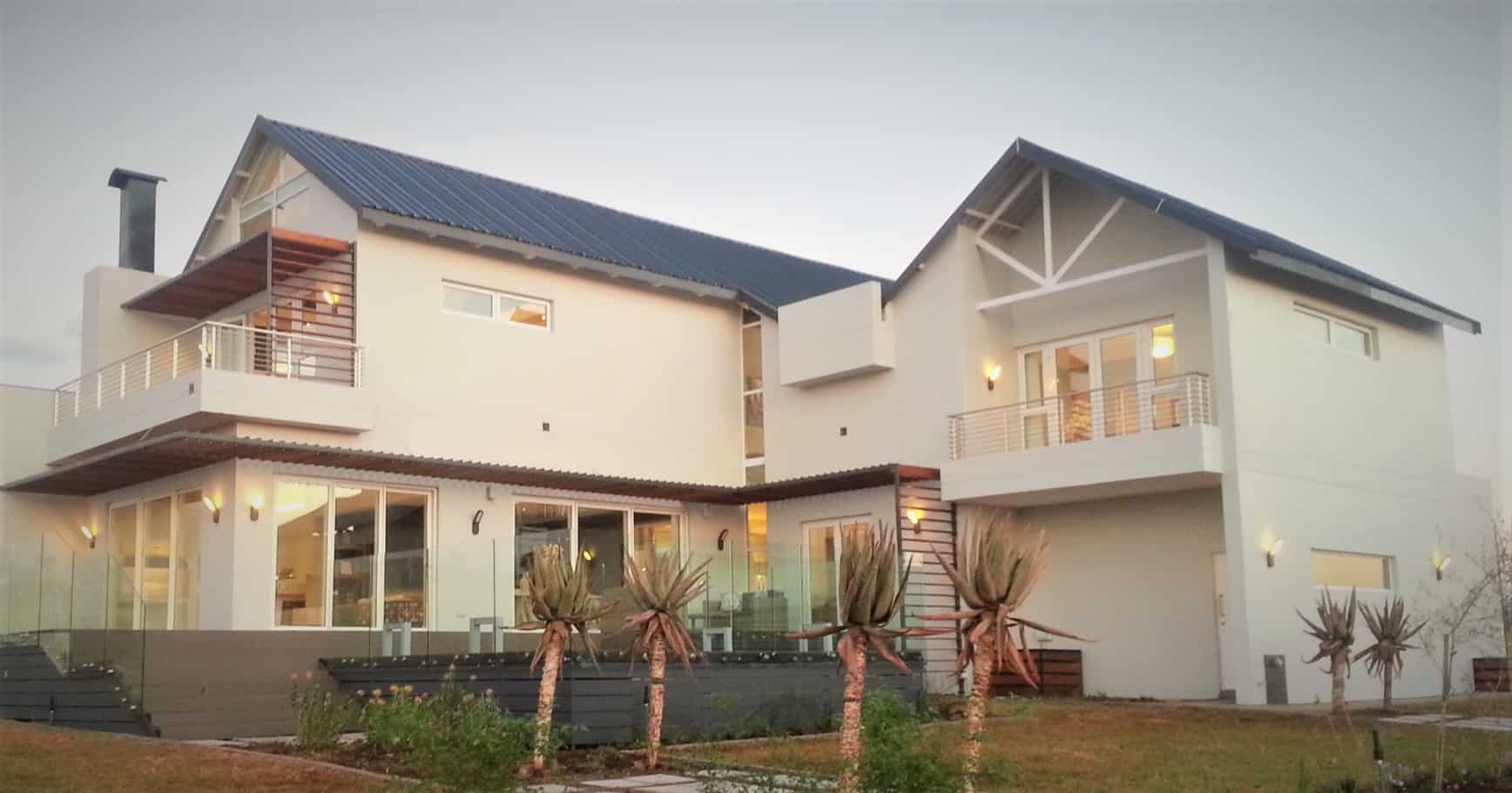 In 2012 Ivecon Projects had the pleasure of partaking in the Century Property Developments Home show. Participants were challenged to build a home in the Waterfall Country Lifestyle Estate in Kyalami within seven months. The only rule being that the house had to be within the Waterfall aesthetics and design guidelines. Sven and Ashley quickly set to work, aligning themselves with Nick Mallandain from Axient Architects. Together they designed, managed and built the showhouse.

In 2009, Sven Iversen had the opportunity to visit the “World Build Expo” in Las Vegas. It was here that he fell in love with the designs and drew inspiration for the homes he would bring to life in South Africa. These inspirations proved invaluable to the design of the showhouse.

The brief was given to Nick and the pressure was on to get started. By the end of March, we had established the site, and within 2 weeks, construction was well underway. With concept drawings accepted, Nick had the go-ahead to start with submission and construction plans.

The architectural design incorporated an open plan feel but maintained a level of privacy within the house and from neighbours as well. We planned the correct orientation of the house. Incorporating high-level windows that ensured that the house was bathed in light throughout the day, regardless of seasons. Where doors were orientated to the harsh westerly sun, we installed specially designed pergolas to dapple the sunlight. These pergolas were also specifically designed to be an integral part of the overall aesthetics and feel of the house.

The home consisted of 4 bedrooms, each with en-suite bathrooms. The 4th bedroom was situated away from the main 3, fitting for a private guest suite or office wing. Downstairs was the kitchen with a separate scullery and pantry. The open plan design allowed for the kitchen to flow through to the dining room, through to the lounge and finally onto the covered patio. A large timber deck extended from the lounge to the patio and wrapped around the pool, casually connecting the outdoors to the inside.

The landscape designer shaped a stunning garden which drew you to nature. Indigenous grass and water-wise plants were chosen to ensure that the garden was low maintenance. Various levels were created with the use of soil mounds, stone structured walls, as well as strategically placed pots. This of course added to the intrigued and depth of detail we wanted to achieve for the homeowner.

As the entry into a show like this was completely at the cost of the participants, we approached a few our trusted suppliers to set up designs, discounts and agreements to bring the house to completion. We were overwhelmed with the response that we received from the suppliers we knew and from a few new ones as well. A few even offered sponsorships.

Completing this house within 7 months was an achievement in itself. Our regular subcontractors worked up to 14 hours a day during the week. They even volunteered to work every Saturday and Sunday to ensure that they stayed ahead. An electrician’s job is fairly detailed on a new home to begin with; but we pushed ahead and threw the additional challenge of home-automation into the mix.

As construction usually goes, each unique build is never without its challenges. During the course of our construction, we sadly lost one of our door suppliers, resulting in a scramble to make alternate arrangements. Our light fittings were being supplied from Belgium. They arrived in South Africa 4 weeks before the deadline with some lights being short supplied, or incorrectly sent, a new shipment had to be flown in.

At the 11th hour, we were notified that our paint colour chosen for internal walls was not going to be permitted, and we needed to change it. A scramble to find a new internal colour proved challenging, especially because the interior decorator was not available for 2 weeks to match colours. Our painting subcontractor really came through and increased his labour force by 200% to achieve the goal.

To add to the pressure, three weeks prior to the opening of the show, we discovered that the furniture that was selected to be showcased in our house was sold through an end of season sale. The interior decorator was thrown into the deep end. She had to choose new soft furnishings, from a store that literally had very little stock leftover from the sale, and they had limited new stock that was only scheduled to arrive after the show.

Sunset Place – the name given to our home, was one of the main highlights of the home show. 12 homes were built in total. Out of the 7 categories that the houses were judged on, we won 2 and placed in another 2.

We came 3rd in the “Best Architecturally Designed Home”, judged by a member of the Gauteng Institute of Architects. We placed 2nd in “Best use of Technology”, judged by the Senior General Manager from the Integrated Demand Management of Eskom.

We came 1st in the “Best Built Home”, as judged by the publisher of Buildaid Building and Pricing Guide. Ultimately, we won the “Greenest Home Built”, also judged by the Senior General Manager from the Integrated Demand Management at Eskom.

The criteria listed for the greenest home award was based on: Sustainability; good passive design in response to orientation; use of alternative energy sources; energy efficient fittings; glazing specification; well insulated; water conservation; home automation; and use of green/recyclable materials.

During the show, an estimated 57,000 to 75,000 people viewed our home. (Figures as per Century Property Developments). Our suppliers were thrilled, having been given the opportunity to showcase their work in a functional homely environment.

We were very proud of all our suppliers, sponsors, and subcontractors. Without them we would not have achieved our two main goals: (1) completion of this prestigious home within 7 months, and (2), receive recognition of our hard work within an estate that prides itself on being one of the highest quality and greenest built estates in South Africa.

What Are Provisional Costs?
Scroll to top